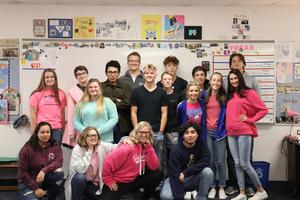 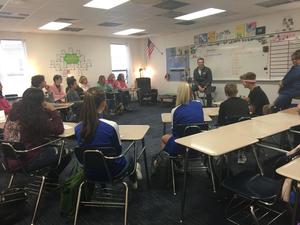 Sean Giggy, a feature news reporter with WFAA Channel 8 News, visited Mrs. Brock’s Journalism class today! These students are passionate about writing, and some aspire to become journalists and reporters in the future.

Giggy began his guest speaking session with the class by just telling them a little about himself. After graduating from high school as a sports player, he determined that playing sports professionally was not an option. He chose to major in broadcast journalism at a small university, which provided him a lot of opportunities. Upon graduating, Giggy found it difficult to obtain a job in a field that was actively diversifying, but finally landed a position in Wisconsin as a sports reporter and anchor. He explained to students that there are 210 national local news markets that serve a certain area based on population: for instance, New York is the biggest market, Dallas is fifth largest, and the market he got hired into was 134th. He was determined to work his way up the local tv ladder, however, and eventually found himself reporting sports in Waco, Texas. A few years later, he put out some feelers and was offered a job here in DFW with WFAA to report what he calls “heartwarming” and “feel good” stories. HE reports around 2-3 positive, uplifting stories each week, which he says gives him the time and ability to really find stories that are meaningful and worthwhile. One of the reasons he originally chose sports reporting, aside from his personal love of sports, was that the subject matter was light and fun, which translated into this new opportunity for him. Since joining the team, Giggy has reported on things like the origin of funny Texas town names and a man who wanted to ensure students could afford to eat lunch. Students then got the chance to ask him industry questions like what his normal work day looks like (he says every day is pretty different), how he finds his stories (some on his own, and some viewers send to him), and about fake news.

Thank you Sean Giggy for taking the time to come and speak to our aspiring writers!